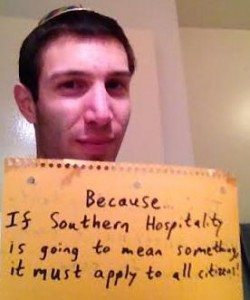 In the late 1970s, my Uncle Eric Rofes marched in a gay pride parade in the Boston area with a paper bag over his head.

Why would he do this? What reason did he have to hide his identity as he sought to make equal rights for LGBT individuals a reality?

His reasons were practical, and heartbreaking. He was a teacher, and at the time, it was completely within the realm of acceptable activity to fire teachers if they were “discovered” to be homosexual. Allowing his face to be seen could have consequences.

Later in the year, he decided that he no longer could hide this aspect of his identity. He decided he would inform the school that he was gay. He would no longer bring fake “girlfriends” to school functions, and, if asked by his students, he would talk with them honestly about the fact that he is attracted to men and not women.

Upon learning this, the school fired my Uncle Eric.

My uncle went on to become an accomplished activist, working tirelessly for equal rights for all, regardless of sexuality. He made a lot of headway. But what is clear to me today is this: there is so much work left to be done, and for me it starts right now here in Mississippi.

Mississippi’s Senate Bill 2681 will receive a final vote soon. If the Senate’s language is passed by the House, it would give businesses the right to deny service to individuals if their reason for doing so stems from a “sincerely held religious belief.” This would give businesses the right to deny service to LGBT individuals without any consequence. A classic example is that of a gay couple going to a bakery to purchase a cake, perhaps celebrating the anniversary of their first date (or of their wedding, if they traveled outside of Mississippi to a state where there is marriage equality). This law would mean that businesses could kick those individuals out of the store. It is the equivalent of a “straights only” sign in the window, reminiscent of a Civil Rights era that I had hoped we had moved past.

As a Mississippian, as a human being, and, for me, as a Jew, I must stand up and do what I can to defeat this bill. I refuse to sit back when a law may pass tomorrow that would mean citizens of my state, today, would have to hide their sexuality just as my uncle did decades ago.

For those looking for a “sincerely held religious belief” in opposition to this bill, I have a very simple one. It is, perhaps unexpectedly, from Shammai, a man noted for being significantly less open-minded than his counterpart, Hillel the Elder. He states, in Pirkei Avot, a Jewish ethical tractate:

It means, “Receive every person with a cheerful countenance.”

It doesn’t say receive some people with a cheerful countenance. It doesn’t say, accept some people cheerfully, but those others, well, you can give them the cold shoulder if you don’t agree with them.

Our society will suffer greatly if we do not live up to those words. For my sake, for your sake, for my Uncle Eric’s sake, and for the future of Mississippi – let us fight against discrimination, and embrace the “sincerely held religious belief” that we should receive everyone with a pleasant face, an open door, a cheerful countenance.

This piece originally appeared at the Southern & Jewish blog at MyJewishLearning.com: