Only 6% of uninsured Mississippians have gotten covered through healthcare reform. What gives?

The good news? 34,307 Mississippians — many of whom could not previously access affordable insurance — have received coverage. That breaks down to 25,554 Mississippians who have signed up for private insurance through the online marketplace, and an additional 8,753 previously eligible for Medicaid who have enrolled for the first time. Thanks to the ACA, they are all more medically and financially secure.

The bad news? More than 94 percent of uninsured Mississippians still have not enrolled in a plan that could — or, through Medicaid expansion, should — be available to them. That’s the nation’s second-worst signup rate, trailing only South Dakota.

(Massachusetts is also technically lower, but thanks to Gov. Mitt Romney, the Bay State had already achieved near-universal coverage.)

It’s not because the uninsured don’t want insurance. The Center for Mississippi Health Policy worked with researchers from the University of Alabama-Birmingham School of Public Health to survey Mississippians’ attitudes and knowledge about the ACA. When the uninsured were asked why they didn’t carry insurance, nearly half said it was because of the cost. Another 34 percent said it was because they were unemployed or couldn’t get insurance through their employer, and 5 percent responded that they couldn’t get it, presumably because of preexisting conditions, lifetime caps, or the other restrictions that were banned by the ACA. Only 2 percent of the insured said that they didn’t want or need insurance.

Therefore, 98 percent of Mississippi’s uninsured population suggested they would want insurance if it were accessible and affordable, but only 6 percent of those eligible for coverage through the ACA have gotten it. What gives?

Note: The “coverage gap” refers to the people living under the poverty line who would have been covered if Mississippi had not rejected the Medicaid expansion. They are not eligible for current Medicaid benefits, but they also do not qualify for tax credits to buy private insurance through the marketplace.

The first explanation is the obvious one: Republican leaders have stubbornly blocked federally-funded Medicaid expansion that would cover between 150,000 and 300,000 Mississippians. They have argued that the state cannot afford the long-term costs of expansion, even though the federal government will pay every dime for three years and 90 percent in perpetuity. Even under the most expensive estimates, Medicaid expansion will cost roughly what Mississippi spends every year on agriculture and business subsidies. Like those economic development programs, the infusion of federal funds to the state’s economy would create thousands of tax-paying jobs. Expansion would also save dozens of rural hospitals that are being forced into bankruptcy without new Medicaid patients.

All that is ancillary to the greater moral point: over one in ten Mississippi adults will suffer unnecessarily without expansion. Mississippi currently has the strictest Medicaid eligibility guidelines in the country. Only low-income children, their parents, and a handful of people with disabilities qualify. Unlike many other states, Mississippi’s childless adults or parents with children over the age of 18 are not eligible for benefits. Medicaid expansion, if accepted, would scrap those miserly restrictions and extend coverage to everyone living under the poverty line — with the option to cover incomes up to 138 percent of poverty.

Luckily, Gov. Bryant and his allies cannot block the rest of the ACA, which supplies tax credits to individuals making between 100 and 400 percent of the poverty line to buy private health insurance. An estimated 150,000 Mississippians are eligible for financial assistance to buy private plans on healthcare.gov, but so far, only the aforementioned 25,554 Mississippians have signed up.

Which brings us to the second explanation: Mississippians simply don’t know what coverage is available to them. 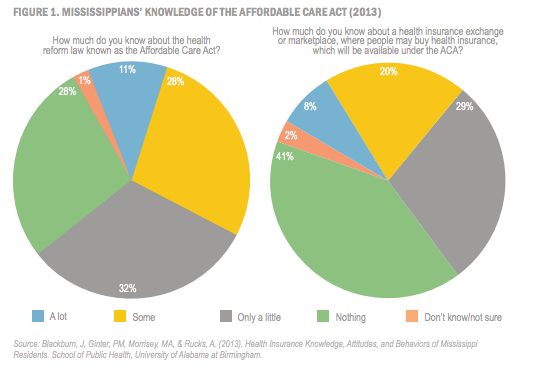 Even when told about the tax penalty for not carrying insurance, the uninsured were wary about signing up through the marketplace. Only 36 percent of uninsured Mississippians said they would buy insurance, while 47 percent were undecided. A full 14 percent said they would rather just pay the fine — even though only 2 percent of the same respondents said they didn’t need insurance.

These data point to a mistrust or unfamiliarity with “Obamacare” among the people it is intended to help — largely the result of obstruction from state officials who have been entrusted with its implementation. Red states across the country have reported lower enrollment rates than blue states. The most prominent exception, Kentucky, provides an instructive case study for what can happen when a state’s leadership does not work against the interests of its people.

Despite electing two of the biggest ACA opponents to the U.S. Senate, Kentucky embraced Medicaid expansion and, led by its governor Steve Beshear (D), has set up one of the most successful state-run marketplaces in the country. After five months of open enrollment, 277,393 Kentuckians have gotten coverage — 39 percent of the state’s total uninsured population. Compare that to the 6 percent of uninsured Mississippians. If positive leadership can make that much of a difference, I ask again: What gives, Mississippi?