The Healthy Students Act has reduced obesity among white children. Why not anyone else?

In the state that ranks at the bottom for almost every health outcome, the Mississippi Healthy Students Act (MHSA) has been hailed as a big step forward in the battle against childhood obesity and chronic disease.

among students, include health education in the curriculum, and create councils of local stakeholders to promote healthy nutrition and lifestyles within communities.

Evaluators from the Center for Mississippi Health Policy and three Mississippi universities have now collected four years of data on the effects of the law, and the overall results appear positive.

Obesity rates have stabilized among Mississippi’s middle and high school students and declined among elementary students (right). Schools are serving less fried food in their cafeterias, and students are getting more exercise during the day.

One caveat remains, however: all of the improvement has occurred among white students. Obesity among black students has actually increased every year since the implementation of the MHSA. As a result, racial disparities have grown since the passage of the law: 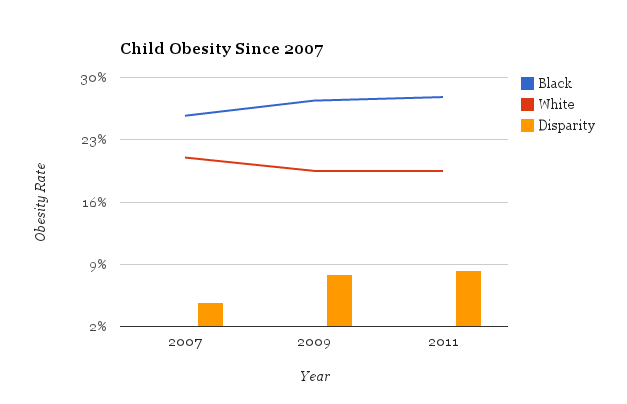 How can the law work so well for one group of students but not another? The explanation involves a tension found in public health conversations throughout the world today.

Preventative health policies such as the MHSA that tackle risk factors for a everybody in a defined area are called population-level strategies. They apply the same rules and interventions evenly. For instance, an ordinance that bans indoor smoking or laws that mandate seatbelts. Many public health experts have touted these kinds of population-level strategies as the most effective approach in terms of both cost and impact.

But these uniform strategies also have their weaknesses. Critics point out that they are often too top-down, without much community involvement — especially among marginalized or vulnerable groups.

The MHSA data confirm what health experts have found among other population-level strategies: they benefit those within the majority population first, while any benefits to marginalized communities lag, if they come at all. Improvements in the overall population can often mask lingering racial, ethnic, and socioeconomic disparities.

The social determinants of health

The MHSA is a well-intended law that has made significant strides to reduce obesity among Mississippi’s schoolchildren. The question is how we can broaden its impact to improve the health of children of color.

We should begin by taking a look at what’s termed in public health discussions as the “social determinants of health.” In plain terms, this just means race, gender, education, violence, jobs, environment, housing — the complex set of social and environmental factors that influence a person’s health.

Education, for instance, is among the most-studied social determinants of health. According to the Robert Wood Johnson Foundation, college grads can expect to live five years longer than people who did not finish high school. The effects don’t stop there. The children of college grads are six times less likely to be in poor or fair health than children of parents without high school diplomas.

One possible explanation for racial disparities under the MHSA may come through a line of recent research on racial/ethnic differences and early life risk factors. Black, Hispanic, and Native American preschool-aged children have been found to exhibit a higher number and range of risk factors associated with obesity than their white peers.

Social context also plays an important role in health. Black Mississippians have historically faced exclusion and discrimination by the state’s health care system. For many, access is still constrained.

Applying this lens, it is entirely possible that the interventions from the MHSA may improve the conditions of one child in a classroom without addressing the needs of the child sitting beside her.

One of the key tactics of applying a social determinants lens in planning health programs is involving communities from the ground up. While the MHSA seeks community engagement through the formation of school health councils, the law places the burden of compliance on the local schools — without the funding to properly carry it out.

The MHSA evaluators found that only 18 percent of schools included representation from each of the required school stakeholders: administration, faculty, staff, students, and parents. Only 19 percent of councils included health professionals.

Some affluent districts, such as Oxford (full disclosure: I am a member of Oxford’s health council), have been able to support robust education and outreach efforts. However, that has not been the norm. In 2012, only one in five Mississippi parents told the evaluators that they were aware that their child’s school had a health council. Only one in ten had actually attended a meeting. Even among school board members, fewer than half were aware of an operational council.

The success of the MHSA depends on engaging a diverse range of local stakeholders with cultural sensitivity and an eye for challenges specific to the local population. Involving community members directly into the project and its implementation ensures a sense of ownership and sustainability that typical top-down strategies often lack. Local people have a better idea about obstacles, as well as a better sense of how to effectively engage the students and families who have been left behind by the MHSA to date.