The Common Core difference, from a teacher’s perspective

Common Core gave me the flexibility to teach to my students' individual needs without compromising essential learning goals that ensured they would be ready for college or careers upon graduation.

In 2012 I moved from Mississippi to New York City to teach at a charter elementary school in Harlem. My 27 fifth grade students had reading levels ranging from third to eighth grade. They grew up speaking 14 different languages in their homes, which were scattered from the far reaches of Brooklyn to the South Bronx. I had spoken word poets, Lego masters, dancers, and chess fiends. One gave me a hug every hour, on the hour. Others had to be coaxed into speaking.

Each of these students learned at a different pace. Some needed specialized attention, some needed to be challenged. One student could compute multiplication with 4-digit products in his head, while others still counted on their fingers.

The job of differentiating instruction to meet the needs of the variety of learners in my class belonged to me, their teacher. I did so by designing a rich curriculum and managing my classroom in ways that kept my students engaged — never bored. My students designed architectural renderings of cityscapes as part of a unit on volume. They explored literary devices by writing “Where I’m From” poems in the style of George Ella Lyon. As part of a unit on data analysis, they used Google Maps to help calculate the range, mean, and median for their morning commutes. They learned how bias influences history by reading a biography of Claudette Colvin, the teenage girl who refused to stand on a Montgomery bus months before Rosa Parks.

All of these lessons were grounded in the Common Core standards for math and English that will go into full effect in Mississippi next school year. Common Core gave me the flexibility to teach to my students’ individual needs without compromising essential learning goals that ensured they would be ready for college or careers upon graduation.

New York was an early adopter of the Common Core State Standards (CCSS) and is one of two states that have been using CCSS-aligned state tests since the 2012-2013 school year. After teaching with the CCSS for two years, I am confident they will make a positive difference in Mississippi, where flimsy, ambiguous standards have long allowed schools to skate by on what George W. Bush famously called “the soft bigotry of low expectations.”

Therefore, it disturbed me when Gov. Phil Bryant recently joined a small chorus of Republican governors in announcing his dissatisfaction with the Common Core standards. This is what he said in a statement last month (from the AP):

Common Core is a failed program and many are realizing that these standards are not what many believed them to be. Mississippi has the responsibility and authority to manage its own education system and not delegate that control to Washington, D.C.

Besides the illogicality of calling a program “failed” before it has been fully implemented, Bryant’s implication that the Common Core represents an educational outsourcing to the feds calls into question how well he actually understands this issue. He’s not alone. Almost all of the political opposition to the CCSS I have seen and heard echoes Bryant’s misinformed hyperbole. Meanwhile, polls show that about 75 percent of teachers support the Common Core.

The truth is, education experts have been calling for more rigorous educational standards since 1983, when the sweeping report A Nation at Risk first warned that “the rising tide of mediocrity” in our schools threatened America’s global preeminence. In the 11-year span from 1995 to 2006, for instance, the U.S. fell from first to 14th in college and university graduation rates.

Standards-based education seeks to hold American students to the same expectations as international counterparts. It was a major tenet of Bill Clinton and George W. Bush’s education reforms that culminated in the No Child Left Behind Act, signed in 2001. The law required all states, for the first time, to have sets of standards outlining what all students should know and be able to do in each subject. Mississippi developed the Math and Language Arts Curriculum Frameworks, complemented with a series of end-of-year standardized tests. 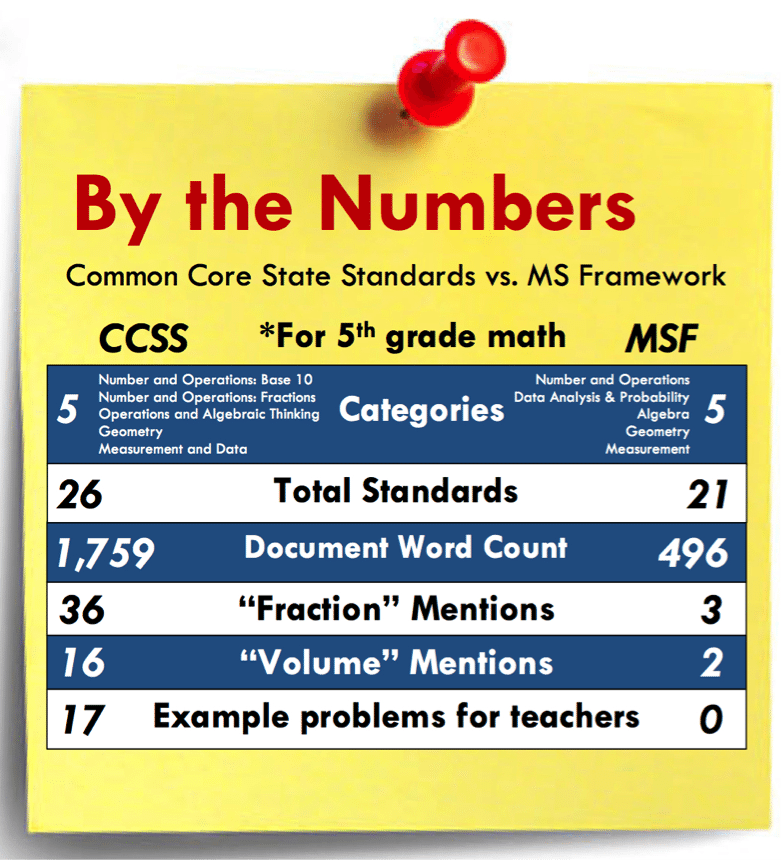 Soon after the standards-based reforms went into effect, the bottom 10 percent of America’s students began making learning gains that outpaced overall averages. Still, the U.S. failed to make up ground on international competitors, which led many to believe that states hadn’t set their bars high enough. Furthermore, the state-by-state patchwork of standards offered little relevance for comparisons across state lines. Upon evaluation by the conservative Thomas B. Fordham Institute in 2010, Mississippi’s standards received a C for math and D for English Language Arts, which received this unsparing critique:

The Mississippi standards are mysterious, as if they were constructed to obfuscate rather than clarify student expectations. They are organized under just two headings: Reading and Writing.

Exams pegged to state standards also varied in difficulty. While most Mississippi students passed the state tests with ease, they scored near the bottom on national assessments.

In 2008, frustrated by years of education stagnation, the National Governors Association, the Council of Chief State School Officers, and Achieve, a nonpartisan, nonprofit education reform group began the process of developing the math and language arts standards that eventually became the Common Core State Standards. While those three groups spearheaded the effort, consultants from the nation’s two largest teachers unions, members from ACT and the College Board, education experts from 48 states (including Mississippi), and 10,000 public comments all played a role in the final standards, published in 2009.

In August 2010, Mississippi’s state Board of Education joined 44 other states and Washington, D.C., when it replaced the previous standards with the new Common Core standards — described by the Fordham Insitute as “significantly superior to what the Magnolia State has in place today.” Districts have been gradually implementing the standards since. Full implementation, complete with new CCSS-aligned math and language arts state tests, is set to occur during the 2014-15 school year.

The CCSS are far more detailed than the outgoing Mississippi Frameworks. They make it abundantly clear to teachers what their responsibilities are.

The CCSS for language arts prioritize reading and analyzing a variety of texts, writing with evidence, and thinking inferentially. They encourage informational texts in earlier grades and emphasize the importance of closely reading specific words and phrases to understand “author’s craft.” My students read as much nonfiction as fiction this year, which built vocabulary and background knowledge — key components of comprehension. By carefully studying authors’ choices, my students quickly became better writers.

The CCSS for math diverge significantly from the current state standards because they require an altered teaching approach. Instead of focusing on the ability to compute and solve, Common Core standards stress the understanding of underlying mathematical concepts. It’s not just about getting the right answer, but the ability to explain how you got there. The standards do not dictate particular strategies or approaches, but they do encourage students to solve problems in a variety of ways — not simply using standard algorithms like long division or stacked multiplication.

As the math curriculum planner for my grade, I studied math standards and student work especially closely. Students who followed strict procedures to solve problems struggled when questions were presented differently. Those who understood the underlying concepts were much more adaptive. This is the biggest change ushered in by Common Core: assessments do not merely test students’ ability to find right answers; they target conceptual understanding with the types of problems students will encounter in the real world.

Let me show you how it works. Below is an example of a basic fifth grade problem involving division of a fraction: 4 divided by ⅓  =  x. If you are like me, you were taught to “multiply by the inverse” whenever presented with a fraction divisor. This procedural approach (left) is highlighted next to a more conceptual approach that Common Core urges (right). 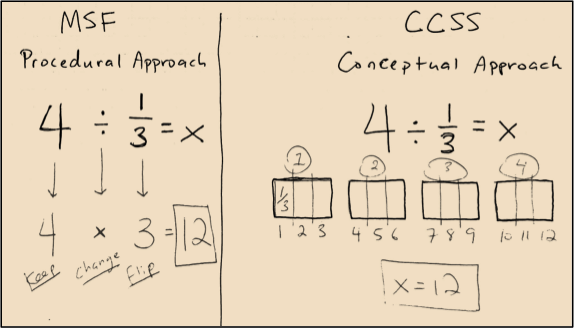 Multiplying 4 by the 3, the inverse of ⅓, on the left will get you the correct answer (12, 0f course). But you will notice that the visual strategy shows why that operation works. There are 3 thirds in every whole, so there will be 4 times as many thirds in 4 wholes; thus 4 x 3 = 12. It may seem like extraneous steps on these basic computations, but my students who understood the concepts behind the operations were more successful when questions were presented in the context of real-world problems. For instance:

Benny is running a 4-mile race. He stops for water every 1/3 of a mile. How many total times will Benny stop during the race (including at the finish line)?

Students who relied on procedures had trouble accessing this type of problem because they did not necessarily recognize it as division. Procedural fluency is important, and the Common Core doesn’t dismiss it, but research shows that students who also have strong conceptual foundations are far more successful in math than their peers who do not. To examine exactly how the Common Core treats the skill of dividing by fractions differently than the Mississippi Math Framework, take a look at the two excerpts below. 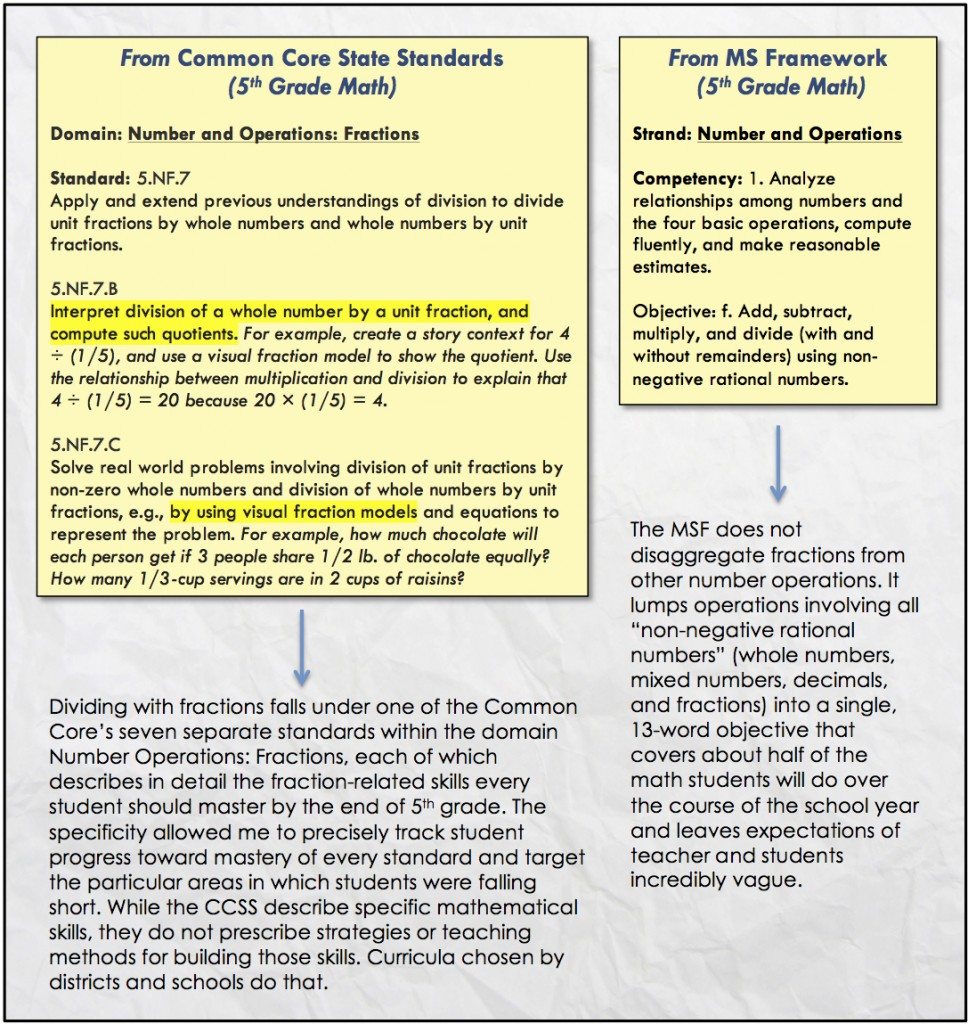 As with anything, changing to the new standards will cause a bit of natural friction. Training Mississippi’s 21,000 teachers to understand the new standards is no small task. In aggregate, the state has already held more than 100 training seminars, and many districts have slowly been phasing the new standards into existing curriculum –– but there is a long road ahead, and implementation will be bumpy. Frustrations are sure to mount among groups of educators and parents as the CCSS take full effect in the fall, but as I often tell my students, we will get there if we are patient. The beauty of the CCSS is that they allow curriculum to progress at a pace conducive to student inquiry, exploration, and eventually, enduring understanding. I know it can be done. In my first year of teaching, 96 percent of my students passed the toughest state math test in New York’s history, and two-thirds achieved the highest possible score.

Gov. Bryant and others who are skeptical of the Common Core need to understand that different is not such a bad word when it comes to education in Mississippi, consistently the nations’s lowest-performing state. The Common Core standards are irrefutably more rigorous than current state standards and represent a shift that schools must make in order to prepare students for the increasingly competitive global workforce. Standards alone cannot do it, but paired with strong leaders and committed educators, they will lead us toward a brighter educational future.