An open letter to Gov. Phil Bryant, re: Common Core

I am a proud product of Missisisppi’s public schools and an elementary teacher who has spent two years teaching a rich curriculum grounded in the Common Core State Standards. As a result of rapid learning gains, my young students in New York City are now on a path to college and career-readiness in a neighborhood where nearly six out of 10 students do not graduate high school. And contrary to what you would have people believe, I put them on a better path without any direct assistance from the federal government. President Obama didn’t help me teach a single lesson.

Despite the Common Core having the full support of the Mississippi Board of Education and the vast majority of professional educators in the state, you recently voiced your dissatisfaction with the standards just as they are about to take full effect in our schools. Your about-face on Common Core comes conveniently on the heels of similar denouncements from Republican governors Mike Pence of Indiana, Mary Fallin of Oklahoma, Scott Walker of Wisconsin, and Bobby Jindal of Louisiana. From the outside, it looks like political opportunism.

The development of the Common Core by the National Governors Association was one of the only unequivocal bipartisan policy successes of recent memory. Forty-five states and Washington, D.C., embraced the new standards. Raising the bar for teaching and learning was as uncontroversial as a July 4th picnic. Of course, all of that changed when President Obama began encouraging states to implement the Common Core or other state-designed targets. Then, the Tea Party and select conservatives saw the Common Core as a sinister power grab by the federal government. Instead of correcting their misinformation, you kowtowed to it.

The children of our state deserve better. A year ago, you signed into law your Education Works reform package, which represented a positive step forward for Mississippi schools. Pulling out of the Common Core at this critical juncture would move us two steps backwards. Many teachers have already adapted to the new benchmarks. You claim to be protecting teachers from government intervention, but jamming the brakes at the eleventh hour would amount to an even greater intrustion into the classroom than any promulgated by the Common Core.

We can have reasoned disagreements about public issues, especially ones as important as education, but surely you can agree that Mississippi cannot afford to revert to the status quo. I took time to listen to some of your recent comments on Common Core. I’ve attached my thoughts on them below. In return, I would appreciate your response so that we may have a healthy debate about the best path forward for our schools. 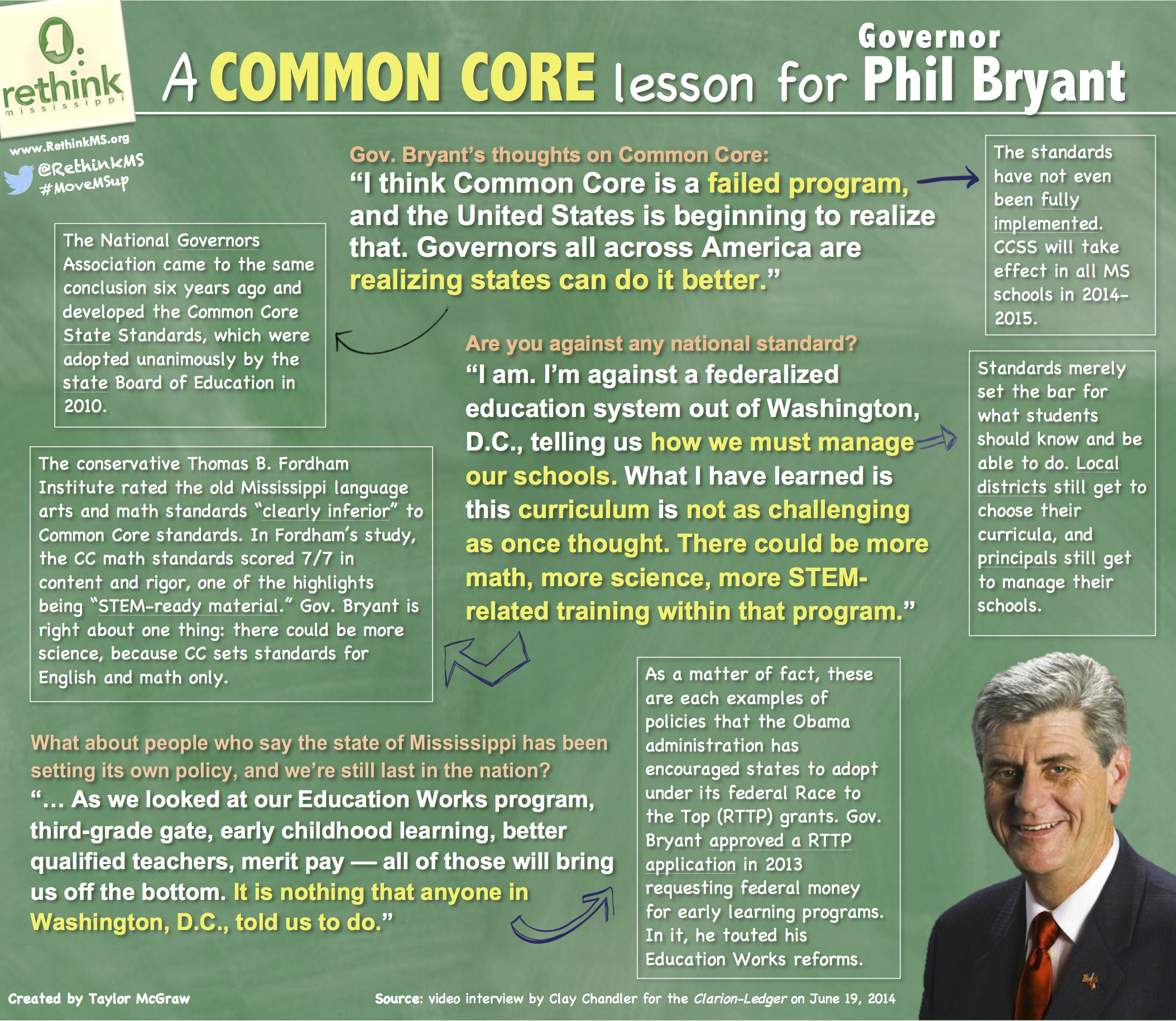