Rethinking the Month: The ‘get caught up so you can enjoy the summer’ edition

Here’s a recap of everything happening at Rethink Mississippi. After you read it, get off the internet and go explore our beautiful state!

The Common Core difference, from a teacher’s perspective

“The [Common Core State Standards] are far more detailed than the outgoing Mississippi Frameworks. They make it abundantly clear to teachers what their responsibilities are.

The CCSS for language arts prioritize reading and analyzing a variety of texts, writing with evidence, and thinking inferentially. They encourage informational texts in earlier grades and emphasize the importance of closely reading specific words and phrases to understand “author’s craft.” My students read as much nonfiction as fiction this year, which built vocabulary and background knowledge — key components of comprehension. By carefully studying authors’ choices, my students quickly became better writers.

The CCSS for math diverge significantly from the current state standards because they require an altered teaching approach. Instead of focusing on the ability to compute and solve, Common Core standards stress the understanding of underlying mathematical concepts. It’s not just about getting the right answer, but the ability to explain how you got there. The standards do not dictate particular strategies or approaches, but they do encourage students to solve problems in a variety of ways — not simply using standard algorithms like long division or stacked multiplication.

As the math curriculum planner for my grade, I studied math standards and student work especially closely. Students who followed strict procedures to solve problems struggled when questions were presented differently. Those who understood the underlying concepts were much more adaptive. This is the biggest change ushered in by Common Core: assessments do not merely test students’ ability to find right answers; they target conceptual understanding with the types of problems students will encounter in the real world.“

“…the state of Mississippi has never sought to fully restore the educational opportunity that it deliberately deprived for generations of black citizens. Consequently, nearly every measure of academic achievement is still stratified by race.

More than one-fourth of Mississippi public schools are at least 90 percent black. Another tenth are at least 90 percent white. And, just as in 1964, students in those identifiably black schools often receive an inferior education. The “black schools” were three times more likely to be rated F than A or B in the 2012-13 school year. Meanwhile, three-fourths of the “white schools” were rated A or B, and only one was rated lower than a C.

After the removal of de jure racial segregation, the operative ingredient for the continued hierarchy became race’s incestuous relationship with poverty. Fifty-two percent of Mississippi’s black children grow up below the poverty line; 19 percent of white children face the same plight.”

We all love Mississippi. So why don’t people like living here?

“Mississippi offers some people as good or better quality of life than anywhere else in the country.  I count myself among them. We have the ability to live elsewhere, but we’ve chosen Mississippi. We are the ones who get to praise Mississippi’s literary and musical culture, its warmth of climate and personality, its other ineffable charms. That’s because we have the security of good jobs, good education, and good health. To put it in Willie Morris’s terms: we love Mississippi because it loves us back.

But the ability to live well in Mississippi is held far too exclusively. One out of three jobs does not pay enough to lift a family out of poverty, and three out of five families are forced to live paycheck to paycheck.  More children are born into poverty than in any other state, and — often bunched together into dismal schools — their chances of rising out are lower, too.”

LeBron is going home. Mississippians should, too.

“Mississippi is a complicated place. In spite of its persistent challenges that can drive people away, this state, unlike any other, implants a deep-rooted connection that sticks to you no matter how far away you go. Those of us who choose to stay might be sacrificing economic potential, but we understand that quality of life extends far beyond dollars and cents. The ability to do good for the area that has given me so much keeps me planted firmly here, bonded by an intangible pull to these people and to this land.

As for Mississippians who have ventured off in search of better fortunes, keep in mind that LeBron’s choice to return to Cleveland was not completely altruistic. He will exercise even more power and will catalyze growth in a dormant area; he will shift from maintainer to creator. Similar opportunities exist in Mississippi for our sons and daughters bold enough to seize them. We will patiently await their homecomings.”

An open letter to Governor Phil Bryant, re: Common Core 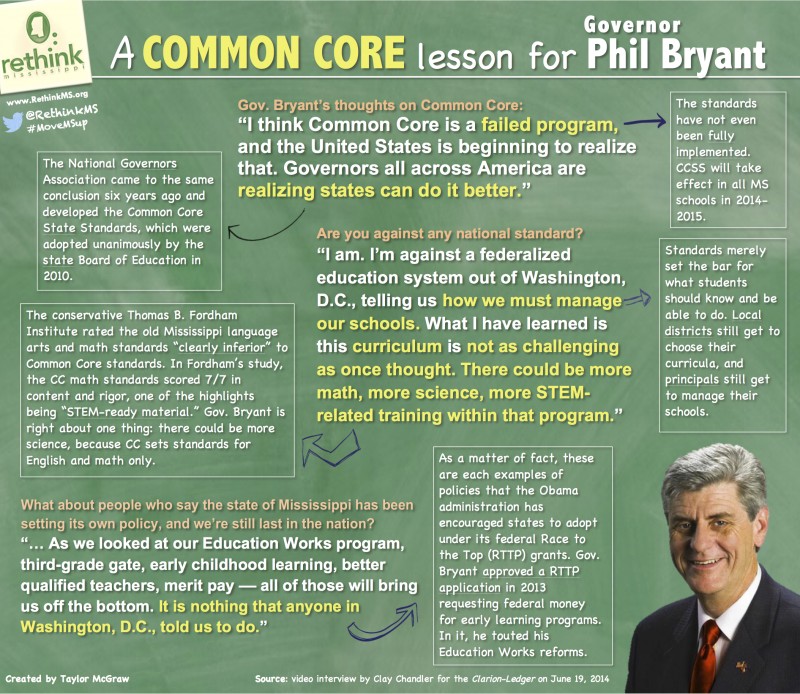 “The development of the Common Core by the National Governors Association was one of the only unequivocal bipartisan policy successes of recent memory. Forty-five states and Washington, D.C., embraced the new standards. Raising the bar for teaching and learning was as uncontroversial as a July 4th picnic. Of course, all of that changed when President Obama began encouraging states to implement the Common Core or other state-designed targets. Then, the Tea Party and select conservatives saw the Common Core as a sinister power grab by the federal government. Instead of correcting their misinformation, you kowtowed to it.

The children of our state deserve better. A year ago, you signed into law your Education Works reform package, which represented a positive step forward for Mississippi schools. Pulling out of the Common Core at this critical juncture would move us two steps backwards. Many teachers have already adapted to the new benchmarks. You claim to be protecting teachers from government intervention, but jamming the brakes at the eleventh hour would amount to an even greater intrustion into the classroom than any promulgated by the Common Core.“

Mississippi has changed since Freedom Summer. The struggle for justice and equality has not.

“These moments of dark humor punctuated the [Mt. Zion memorial] service,  a three-hour marathon of speeches, songs, and sweat (“Wouldn’t be Neshoba County without it,” William Winter, the former governor in attendance, remarked.) The tone was one part reunion: old comrades-in-arms sharing hugs and memories; and another part revival: the reawakening of a movement that had long since lost its spirit.

Hanging heavy in the air was the paradox of the myriad retrospectives about Mississippi Freedom Summer taking place this year. Mississippi has come farther in absolute terms than most of the volunteers in the summer of 1964 could have ever imagined. Yet Mississippi’s relative position at the bottom of national social and economic rankings has not budged. More critically, black Mississippians still occupy the same inferior position compared to whites on most, if not all, of those metrics.”

Rita and Bill Bender taking to #SYI about the deliberate denial of public education in Mississippi #AMovementOfYouth pic.twitter.com/rhgHqTviSO

Read this if you’re a Mississippian who has spent time away from MS. If not, read it anyway: http://t.co/yifCqhLhL0 via @PhuzzieSlippers