Medicaid expansion is a prescription that Mississippi needs to fill

Mississippi’s healthcare system suffers from a chronic illness: the state with the country’s worst health problems also happens to have the least money to afford treatment. One-fifth of Mississippi adults have no means to pay when they show up at the hospital — often through the emergency entrance.

With the passage of the Affordable Care Act in 2010, the federal government wrote Mississippi a much-needed prescription. Federal subsidies allowed many low- and middle-income families to afford private insurance for the first time, and everyone living below or near the poverty line was given eligibility for Medicaid, the federal-state public insurance program. The federal government offered to pay for this expansion in full for the first three years and 90 percent in perpetuity.

The Center for Mississippi Health Policy estimated that the ACA would reduce Mississippi’s uninsured rate to 6 percent — from among the highest in the nation to the national average. Mississippi families would become more medically and financially secure, and doctors and hospitals would gain hundreds of thousands of new paying customers.

But when the Supreme Court affirmed the Affordable Care Act’s constitutionality two years ago, they allowed states to opt out of Medicaid expansion. In other words, they allowed the patients to turn down their medicine. That’s exactly what Mississippi did, leaving one in ten Mississippians without coverage options and placing healthcare providers in a serious pinch.

Mississippi currently has the strictest Medicaid eligibility guidelines in the country. Only low-income children, their parents, and a handful of people with disabilities qualify. Unlike many other states, Mississippi’s childless adults or parents with children over the age of 18 are not eligible for benefits. Medicaid expansion, if accepted, would scrap those miserly restrictions and extend coverage to everyone living under the poverty line — with the option to cover incomes up to 138 percent of poverty.

The below map shows how many people will be caught in the “coverage gap” — ineligible for current Medicaid benefits due to income or family structure, but too poor for assistance to purchase private insurance, which starts above the federal poverty line.

To understand how the partisan decision to reject Medicaid expansion has squeezed Mississippi’s rural doctors and hospitals, you first have to understand the convoluted payment system that the ACA was supposed to phase out.

Hospitals are required by law to treat patients regardless of their ability to pay. This often occurs in emergency rooms, the most expensive source of treatment. Hospitals in areas with high uninsured populations would quickly go bankrupt if they had to cover all of those costs themselves, so the federal government reimburses them for part of the uncompensated care. The reimbursements are known formally as Disproportionate Share Hospital, or DSH, payments.

Hospitals wouldn’t have to pick up the tab if their patients had insurance to cover the cost of treatment. That’s exactly what the ACA had in mind when it reassigned the money the federal government was spending on the back end to reimburse hospitals to pay for Medicaid expansion on the front end.  DSH reimbursements will be phased out as the insured population grows — at least in theory.

Here’s a schedule of cuts to Mississippi hospitals, based on national-level percentage reductions.

The reduction of DSH payments is not contingent upon a state’s decision to expand Medicaid. It will happen either way. Mississippi’s doctors and hospitals are still required to provide care for the uninsured, but now they’re on the hook for most of the costs themselves. For providers in Mississippi’s most underresourced areas — also the areas with the greatest healthcare needs — layoffs and bankruptcy have already begun.

On the flip side, a 2012 report from the University Research Center at the Institutions of Higher Learning (IHL) estimates that if Mississippi had expanded Medicaid eligibility, uncompensated care would have declined 57 percent — corresponding with the decline in DSH payments. The experience of states that ultimately gave up their resistance to Medicaid expansion are now bearing out how much hospitals stand to gain. For example, Arizona’s hospitals reported a substantial gain in business and a 31 percent decline in uncompensated care during the first four months of expansion.

The reduction in healthcare access will affect everyone, not just the uninsured. After all, when the doctor leaves town, it doesn’t matter what kind of insurance coverage you have. Treatment will become more difficult to obtain.

Mississippi already had one of the worst doctor shortages in the country. The rejection of Medicaid expansion will exacerbate the problem by reducing the financial viability of practicing in many poor, underserved areas.

Mississippi has fewer than 60 percent of the doctors and nurses that are required to meet current demand, and a higher percentage in most rural areas. More than half of the state’s physicians are concentrated in four metro areas, with 36 percent in Jackson alone.

Nearly every county in the state is classified as a Health Professional Shortage Area (HPSA) by the U.S. Department of Health and Human Services. According to the IHL report, HPSA counties in Mississippi need 430 additional primary care doctors to reach an adequate population-to-physician ratio. The deficit only increases if you include dentists and mental health professionals. 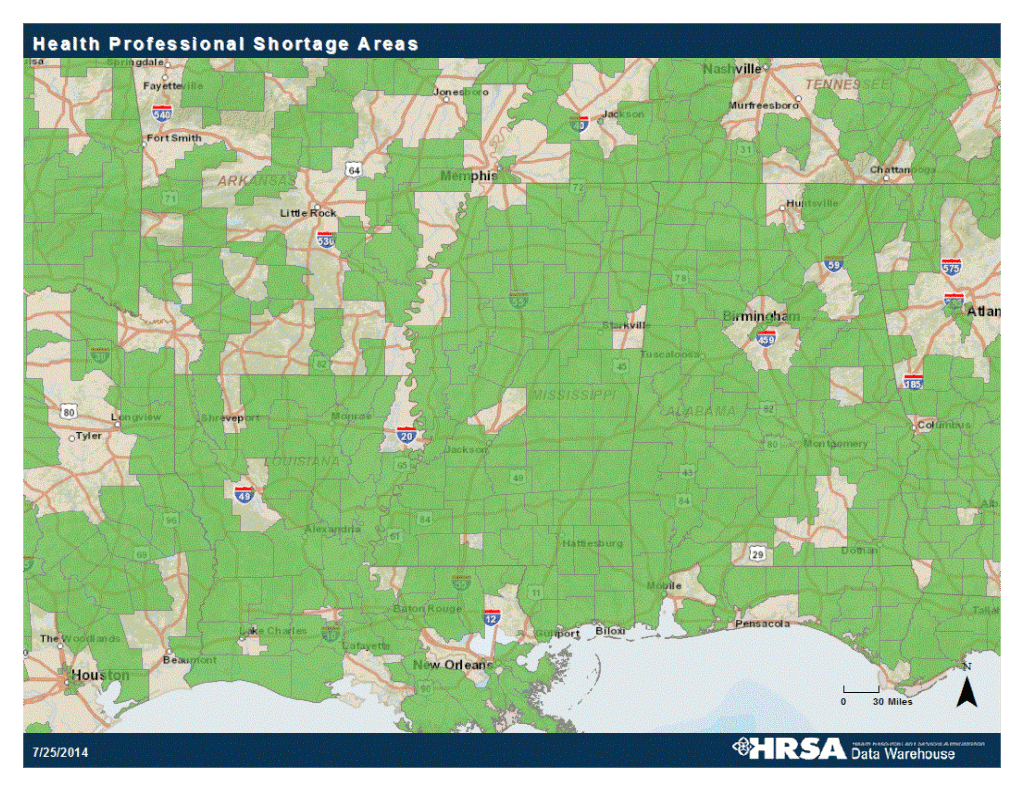 Medicaid expansion was supposed to kill two birds with one stone. The uninsured would be extended affordable access to healthcare, thereby increasing demand for doctors and hospitals in the areas which were not fiscally viable before. In short, the law should simultaneously reduce the rate of uninsured adults and help fill the state’s massive shortage of providers.

Even though cuts in federal money are minimal at this stage, news of economic distress at hospitals has touched every part of the state. The State Auditor released a study in April that assessed the financial health of publicly-owned rural hospitals from 2009 to 2012. The report found that many of Mississippi’s rural county hospitals were in good fiscal shape prior to the implementation of the ACA. Since then, even the hospitals given a good bill of health have had to cut back.

For example, the Auditor’s report rated the Southwest Mississippi Regional Medical Center in McComb above the national average in financial strength. In Feburary, however, the hospital ended contracts with five staff doctors, citing a projected $8 million cut in federal reimbursements without the requisite Medicaid expansion. Hospital CEO Norman Price explained the situation to the Associated Press:

The Affordable Care Act will force the acute care delivery system to evolve to accommodate a new reimbursement reality. As a result of the Affordable Care Act, the non-expansion of Medicaid will have the effect of over-running the emergency departments with non-paying patients. The inevitable cuts and changes will not be popular nor easy to accomplish. However, all will be necessary in order to move this medical center forward into the new Affordable Care Act world.

This week, the Singing River Health System on the Gulf Coast announced the closure of two primary care clinics in Gautier and D’Iberville. CEO Kevin Holland’s statement in the Sun-Herald echoed the refrain from providers around the state:

Due to the organization’s financial challenges brought on by declining reimbursement and rising levels of uninsured we are serving, we are presently assessing all of our operations to ensure we are performing as optimally and efficiently as possible to meet the healthcare needs of our community.

The rejection of new Medicaid enrollees all-but-guarantees that hospitals serving high-need areas will remain in economic panic. Creative ideas to generate revenue will only take healthcare providers so far. They are bound by federal law to treat people with emergencies and, now with less staff, will continue to absorb additional costs while losing the reimbursement stream that previously helped keep them out of the red.

If we want to see just how much self-inflicted pain Mississippi has caused, look no further than the Southern states that did decide to expand Medicaid. Arkansas, West Virginia, and Kentucky have experienced among the largest decreases in uninsured rates in the country, according to a new survey from WalletHub. The number of uninsured in each state has declined between 7 and 10 percentage points — cutting the uninsured rate up to half in a single year. Mississippi, on the other hand, is the only state in the country that has more uncovered this year than last year. The Magnolia State’s uninsured rate has grown 3.34 percentage points, to 21.46 percent.

Leaving money on the operating table

Blocking Medicaid expansion may give a short-term political boost to state lawmakers, but the long-term public costs of their positions are devastating. In 2012, the IHL’s University Research Center projected major increases in state revenue and employment from the larger role of Medicaid. This would create an economic boon for a state that lags behind the rest of the country in nearly every metric. Forecasting the next decade, the IHL report estimated that increased federal spending would support 9,000 jobs and produce $841 million in personal income.

The state would incur additional Medicaid costs — 10 percent of the expansion costs in the out years — but it would get a healthier population and a more productive workforce in return. Despite the potential economic growth, state leaders remain steadfastly opposed, citing their belief that the federal government would reneg on its share of the costs. Governor Phil Bryant articulated that argument in an interview with the Associated Press:

I mean, here we would be saying to 300,000 Mississippians, ‘We’re going to provide Medicaid coverage to you,’ and then the federal government through Congress or through the Senate, would do away with or alter the Affordable Care Act, and then we have no way to pay that. We have no way to continue the coverage.

That explanation seems disengenous at best. The federal government already contributes roughly half of Mississippi’s budget, and state leaders quickly turn to federal support when devastation strikes, as we’ve seen with recent hurricanes, tornadoes, floods, and oil spills. Mississippi’s uninsured rate and doctor shortage are slow-moving disasters of their own kind. These chronic social ills require federal support as much as any natural disaster.

Medicaid expansion is not a cure for all of Mississippi’s health problems, but it will ease plenty of unnecessary suffering among patients and providers. Turning it down makes about as much sense as getting a prescription from the doctor, but never taking it to the pharmacy.