Mississippi produces the most ‘geniuses’ in the South

Mississippians win MacArthur "Genius Grants" at a higher rate than residents of any other Southern state. What, if anything, does that say about us?

Mississippians have a preoccupation with genius. We take more pride in the God-given and unteachable — William Faulkner’s prose or Walter Payton’s agility — than the learned and practiced. It’s one of the perverse, often self-defeating contradictions within our state’s identity: amidst fields of ignorance, brilliance is nurtured.

Perhaps that’s why we pay close attention when the MacArthur Foundation awards its annual fellowships, or “Genius Grants.” Yesterday, MacArthur unveiled the class of 2014: 21 supremely-talented individuals in fields ranging from labor organizing to jazz composition.

No Mississippian made the list this year, but the MacArthur Foundation published some interesting statistics about the geographic distribution of its 897 previous fellows. As one might expect, our state has historically been fertile ground for geniuses (which MacArthur, and I, define as exceptionally creative, innovative, and motivated people).

The statistics published by the MacArthur Foundation credit six Mississippians as fellows (note: they don’t list names, so I’m not quite sure whom they are counting). In per capita terms, that stacks up to 21st nationally, including D.C., but it’s tops among states that can be considered Southern. Aside from Virginia, Mississippi produces MacArthur fellows at more than twice the rate of any of our regional counterparts. 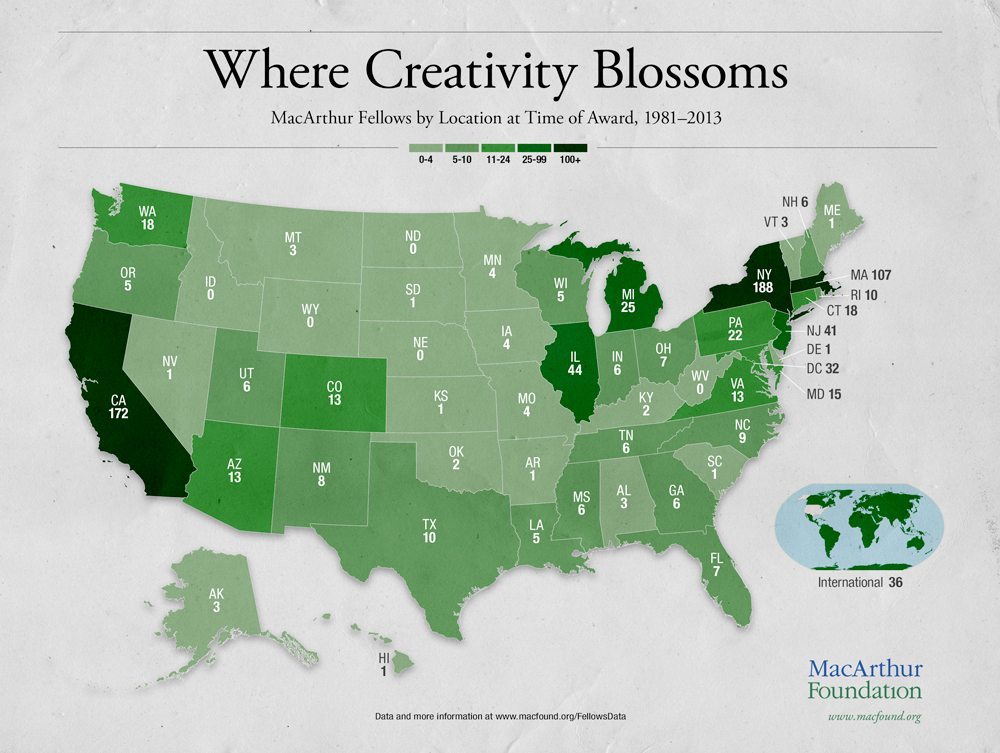 Now, our Southern peers might quibble and say that they stack up better against Mississippi when counting where fellows are born, not where they lived when they won the award. Mississippi still comes out ahead, though by a slimmer margin.

The difference is that all of Mississippi’s fellows elected to stay home. Other than Mississippi, only Tennessee, North Carolina, and Virginia — certainly benefiting from the draw of the D.C. area — can claim as many or more fellows at the time of their award than at birth. 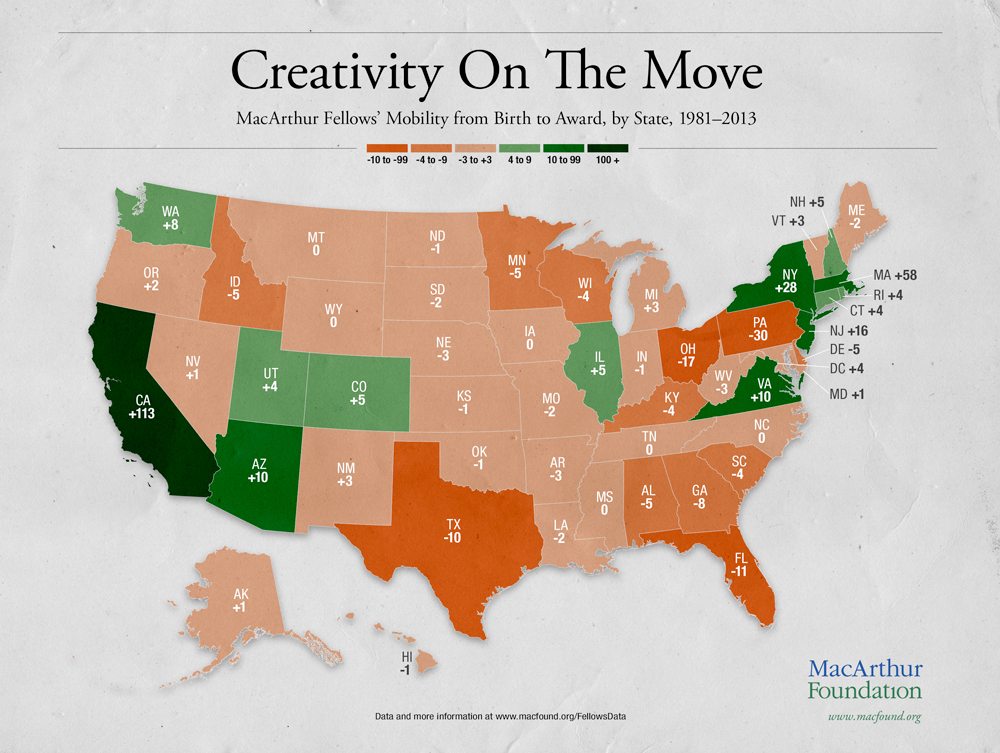 This is a bit of a paradox for two reasons. First, as Rethink has written before, Mississippi is the only Southern state that has lost more residents than it has gained in recent decades. The effect is especially pronounced among the most-educated Mississippians — the MacArthur pool, more or less — who often have to leave for professional or educational opportunities they can’t find in their home state.

Second, MacArthur fellows are statistically more mobile than other Americans. The foundation reports that 79 percent of the 701 fellows born in the U.S. lived outside their native state at the time they won their award. By comparison, 30 percent of the total population and 42 percent of college grads live outside of the state where they were born, according to Census data.

Yet all of Mississippi’s MacArthur fellows bucked the trend. This small and exceptional sample probably can’t bear the weight of broad conclusions about Mississippi’s relationship with genius, but I will offer an observation nonetheless.

Creativity always seeks a canvas. Even with the contributions of Mr. Mitchell, Dr. Shirley, Mrs. Blackwell, and many others, Mississippi’s canvas still has many blank spaces waiting to be filled in. And for those with eager hands, the state’s ongoing tension between conflict and compassion offers a vibrant palette of colors with which to work.

It’s unlikely that Mississippi gives birth to more geniuses than other states, but we do provide those who have talent and grit with the room to create. Most won’t win MacArthur Fellowships or other prestigious awards. Some might not earn much recognition at all. But they can find opportunities to express and fulfill their genius in a place that values it more highly than any other.