The handful of Mississippians who have risen from poverty to prominence occupy more space in our imaginations -- and our TVs, books, blogs, etc. -- than combined stories of the 256,000 Mississippi children currently living in poverty. 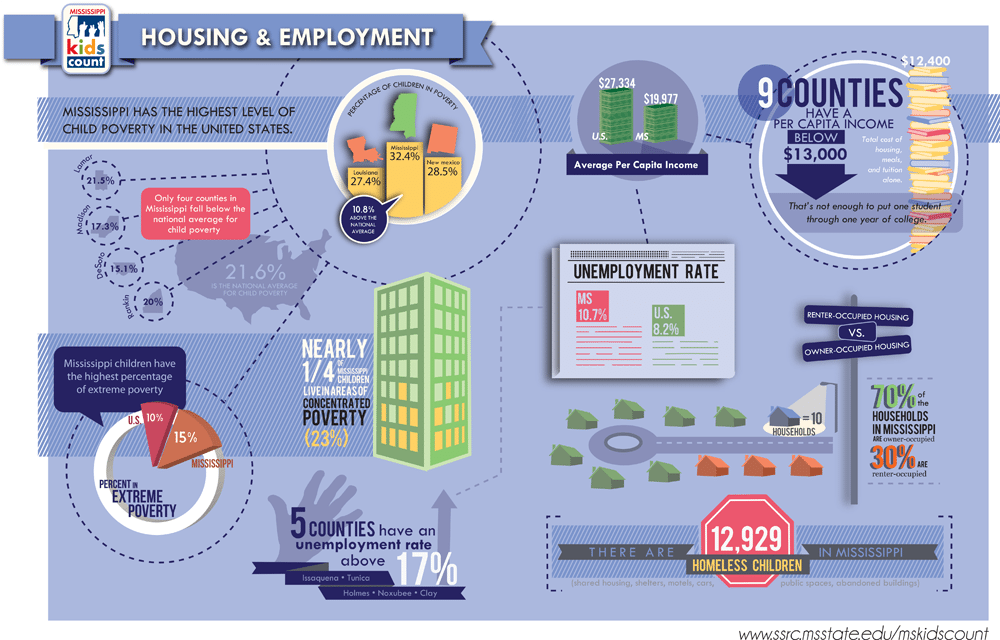 “Hunger stole upon me so slowly that at first I was not aware of what hunger really meant,” Richard Wright writes in the first chapter of his autobiographical tale Black Boy. The next few pages offer vignettes from his early life in Mississippi and Memphis — from standing hungry while his mother cooked for white families, to being forced to fight a gang of older boys, to living in a dismal orphanage. The chapter culminates in an adulthood encounter with his estranged father, by then a rural sharecropper who lived drudgingly as a “creature of the earth” after failing to find prosperity in the city. Wright reflects on his own life’s trajectory, which ended not in peonage but “undreamed-of shores of knowing” — and, ultimately, a legendary literary career.

We read these words, and thus know of Wright’s early life, precisely because he was able to escape the surly bonds of child poverty in Mississippi. When viewed through the lens of biography, his excruciating hunger and other early struggles are often mistaken as inspiration — of prologue to his greatness — rather than a scourge that stifles much more potential than it creates.

We Mississippians are guilty of glorifying (retrospectively) the poor upbringings of many of our most successful sons and daughters. Our narratives begin on a farm without indoor plumbing near Kosciusko, or a shotgun shack in Tupelo, or a sharecropper’s cabin in Sunflower County. The stories that follow take twists and turns — often, out of Mississippi — until our protagonists have attained enough fame to be recognized worldwide by only a single name: Oprah. Elvis. B.B.

These stories each have the appeal of happy endings. We rarely hear the ones that do not. Given that 32.4 percent of Mississippi’s children now live beneath the federal poverty line — and with data showing those born on the bottom are likely to stay there — that is a far, far larger number.

The latest poverty rate (and the many other stats in the above infographic) comes from the Annie E. Casey Foundation’s latest KIDS COUNT report on the condition of children in America. The 2014 release marked their 25th edition, which aggregated sixteen metrics under four umbrella categories: economic well-being, education, health, and family and community. Each state was scored on these categories and assigned an overall ranking. [Read Mississippi KIDS COUNT director Dr. Linda Southward’s Rethink op-ed explaining their metholodogy].

These statistics tell a devastating story, but one that lacks the critical ingredient of suspense. Mississippi has now finished dead last 24 times out of 25 chances. We’re so jaded about the scarlet “50” on our chests that the only remarkable occurrence is when we rise to 49th for a moment, as we did in the 2013 KIDS COUNT, before gravity pulls us back down to the bottom.

For many in Mississippi, ranking last on this and the myriad other national surveys can seem inevitable. The underlying problems can seem intractable. Instead of addressing entrenched deprivations head-on, it’s often easier to change the subject to one of those stories with a happy ending. Consequently, the handful of Mississippians who have risen from poverty to prominence occupy more space in our imaginations — and our TVs, books, blogs, etc. — than combined stories of the 256,000 Mississippi children currently living in poverty.

It’s time for Mississippi to stop thinking of child poverty as an intractable inevitability that springboards those with merit to transcendence. It’s time for us to recognize that Mississippi squanders far more of its human potential than it develops. It’s time for us to admit that the struggles our children face have been created and perpetuated through a series of decisions by adults. And most importantly, it’s time to make the elimination of child poverty Mississippi’s top economic development, education, health, criminal justice, and moral priority.

[alert type=”info”]How does your county do? Look up the results here.[/alert]

From Mississippi’s vantage point on the bottom of the KIDS COUNT rankings, we should crane our necks to see what is working in the states that finished in the top ten. Not coincidentally, the states that provide the most money and programs to support children and families are the ones with the lowest rates of child poverty. Most have chosen to make work pay enough to support a family by setting minimum wages above the national baseline and offering tax refunds to low-wage workers and parents with dependent children. Most give children access to high-quality early education, health, and development programs. Most pay sufficient salaries to attract and retain top teachers and school leaders. And nearly all have accepted federal Medicaid expansion to provide medical and economic security for low-income families.

If we are serious about stopping the transmission of poverty to the next generation, our search for good ideas shouldn’t stop at the water’s edge. Other developed countries chose long ago not to tolerate such high levels of need among children. Most have crafted policies to effectively eliminate child poverty. For example, pre-tax income inequality is slightly larger in Finland than it is in America. However, under their generous system of family support, only one out of 25 kids grows up in the lowest income quartile, compared to nearly one in four in America — and more than one in three in Mississippi.

Not only do childhood deprivations pose far-reaching economic consequences, but surely the most basic test of a society’s humanity is how it treats its youngest and most vulnerable. No matter how many rags-to-riches stories we tell ourselves, Mississippi is failing its future generations when measured against the rest of the country and developed world.